Death of Sarah Catherine Manchester from complications of childbirth. 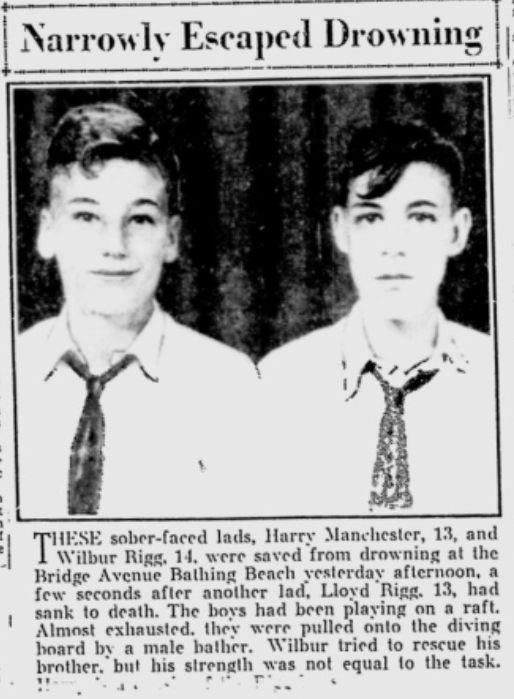 These sober-faced lads, Harry Manchester, 13, and Wilbur Rigg, 14, were saved from drowning at the Bridge Avenue Bathing Beach yesterday afternoon, a few seconds after another lad, Lloyd Rigg, 13, had sank to death. The boys had been playing on a raft. Almost exhausted, they were pulled onto the diving board by a male bather. Wilbur tried to rescue his brother, but his strength was not equal to the task.

Harry was orphaned by the death of his father, Jason Manchester.

On the outbreak of World War II, Harry enlists in the Canadian Army and is initially trained at Camp Borden, Borden, Ontario, Canada.

The Essex Scottish Regiment is re-located back to Camp Borden, in preparation for overseas deployment.

Harry and the Essex Scottish Regiment shipped from Camp Borden, Ontario, to Halifax, Nova Scotia via railroad, departing on July 14th; then aboard the RMS Empress of Australia to Scotland, late July:

The information cards shown above were distributed to Harry William Manchester and other passengers aboard H.M.T. (His Majesty’s Troopship) Empress of Australia during the Trans-Atlantic crossing from Halifax, Nova Scotia, Canada to Scotland, in convoy “TC6.”

Harry William Manchester is assigned permanent military police (“M.P.”) duties with the Essex Scottish Regiment. In this M.P. role, he is exempt from normal parade duties and nighttime curfews.

Harry trained as a military policeman and transferred to Number Two Company (No 2 Coy) of the Canadian Provo Corps.

Harry trained with the OPERATION RUTTER/JUBILEE combat forces on the Isle of Wight, in preparation for the Dieppe Raid.

Harry participated in the Dieppe Raid, when he went ashore on RED BEACH with the Essex Scottish Regiment, and was severely wounded on the beach by shell fire (assumed to be from mortar fire). Because of the heavy enemy fire, the Royal Navy was unable to evacuate most of the raid survivors, and Harry was captured on the beach with the remnants of the Essex Scottish Regiment.

Letters sent from Canada to Harry are returned unopened and stamped “Missing.” This is the first indication to Harry’s friends and relatives that something has happened to him.

Harry’s writes his first letter as a POW, written to his sister Frances, at Ruthven, Ontario. In the letter, Harry asks his sister to convey the message to their relatives that Doug Scratch and Bill Hizeman, also captured at Dieppe, were both alive and safe as fellow POWs.

This letter appears to have been written prior to Harry’s internment in a regular POW camp (i.e., a “Stalag”), and arrived at the Ruthven, Ontario post office on December 16th.

The notification that Harry William Manchester was being held as a prisoner of war (POW) came through the International Red Cross in Geneva, Switzerland. The handwritten notes (below) were in Harry’s correspondence archive held by his sister, Mrs. Elton Newman of Cottam, Ontario.

The initial notification to Harry’s family that he is being held as a prisoner of war in Germany:

More than 230 men of the Essex Scottish Regiment previously reported missing in action, following Dieppe are now listed as prisoners of war, according to information being received by relatives here from the International Red Cross.

Telegrams are continuing to arrive at homes in the Windsor district, bringing the glad news that a son or husband is alive—somewhere in Germany.

Over 500 members of the regiment were reported missing after Dieppe. Reports to date indicate that at least half this number were taken prisoners. In estimating the number of Scottish held as prisoners, allowance must be made for the fact that the families of some Scottish members do not live in this district and The Star as a result, has not yet been advised of word received through the Red Cross.

For the purpose of maintaining a complete list of men of the regiment now prisoners of war, Lieutenant-Colonel McCorkell is anxious to have complete details of name, rank, regimental number, prisoner number and name of the prison camp.

Included in the list to date are 24 officers of the regiment. Major John A. Willis, reported “missing, believed killed,” and Lieutenant Alfred Douglas Green, reported missing, have not been reported prisoners to date. Another Scottish officer, Lieutenant James Palms, of Detroit, was reported killed and reports of the attack contained special mention of his bravery as he led his men up the Dieppe beach.

Other Windsorites who were with the Royal Canadian Engineers in the Dieppe raid were reported as prisoners today.

New additions to the list of prisoners are as follows:

First POW letter written by Harry from Stalag VIIIB, which would be his home for the next two years.

Dieppe POWs’ are tied with rope at roll call, lasting from dawn to dusk, with the men confined to their compound; this process repeated daily for thirteen months. Manacles replaced the rope on or about December 1942. (Source: Clare Diary and Harry’s recollection.)

Prisoner of War in Stalag VIIIB.

Prisoner of War in Stalag VIIIB. About this time, the Germans reorganized the POW camps in the Lamsdorf area, and Stalag VIIIB was designated Stalag 344.

Prisoner of War letter to Mr. Jimmie Woods (Harry’s nephew) from Stalag VIIIB . The Stalag designation was changed to “Stalag 344.”

Canadian POWs from the Dieppe Raid are transferred from Stalag VIIIB/344 to Stalag IID in the Stargard area. (Source: Clare Diary.)

POW letter written by Harry from Stalag IID. This is the last POW letter in the correspondence collection.

The POWs in the east (including the Stargard area) are marched west through Germany to avoid liberation by approaching Russian troops. This movement was part of what is now known as the The March.

Harry and fellow POWs negotiated hourly rest breaks of 10 minutes with their German guards during their movement westward. The political prisoners also being marched westward at that time were not given rest breaks.

POW camp liberated by British forces (probably Stalag XIB near Fallingbostel in Lower Saxony ) with the arrival of  British forces during the night. The prisoners awoke to a British tank parked outside of the POW camp main gate. (Source: Harry’s recollections and the Clare Diary.)

Telegram from Harry Manchester in England to Mrs. Elton Newman advising stop all mail to England.

Harry is repatriated to Canada aboard the RMS Queen Mary.

The Essex Free Press (Essex, Ontario, Canada) announces that Harry arrived home during the week prior to July 20th.

Harry and family enter the United States as immigrants, and move into a rental duplex on Field Street, Detroit, Michigan.

The Manchester family buys and moves into a home on Carlin Street in Detroit, Michigan.

Harry passes away in the early morning hours of February 25, 1974, as a result of bone cancer. He is buried at Mt. Olivet Cemetery, Detroit, Michigan.

Dreams Of Things That Were…

“The shadows are lengthening for me. The twilight is here. My days of old have vanished tone and tint; they have gone glimmering through the dreams of things that were.”

– Address by General of the Army Douglas MacArthur to the Corps of Cadets accepting the Thayer Award, May 12, 1962.